New Study: Incarceration Price Tag--1 Trillion Plus
At first, the Jessup prison administration scoffed at the idea of male inmates knitting. The prison administration, in the end, agreed to this innovative program and decided to try a new avenue for the inmates of Jessup Pre-Release. Since the inception of the program, two years ago, your inmate locators will find many inmates knitting with many more inmates on the waiting list for the program. The inmates have found a creative way to pass the slow grinding prison time. It is a time for the incarcerated to forget where they are and mingle with inmates of different color, races, and more importantly – gangs. The projects such as hats are given to those who are in need. The two ladies who created this program deserve a well earned congratulations for developing a program that actually helps inmates behind bars. It was a pleasure to read the following ABC story. 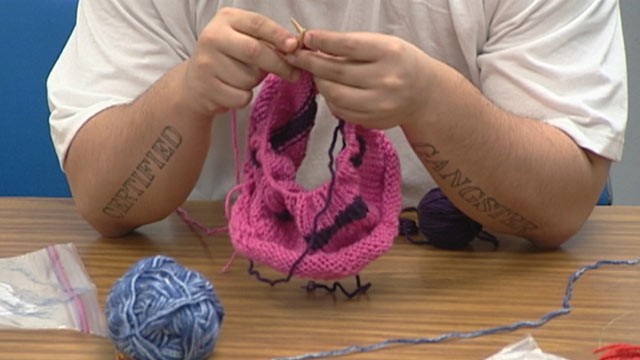 The “Knitting Behind Bars” volunteer program has taught more than 100 prisoners to knit. (ABC News)
By TJ WINICK (@tjwinick) and JACKIE JESKO

“I’m arrested for armed kidnapping and I love knitting.”

Every Thursday around dusk, a group of men, hardened criminals sentenced for a variety of violent crimes and incarcerated at the Pre-Release Unit in Jessup, Md., can be found with knitting needles in hand and balls of yarn in their laps.

“I’m in for attempted murder and I’m knitting a small hat for a kid,” one inmate said.

Lynn Zwerling and Sheila Rovelstad started the “Knitting Behind Bars” program at Jessup two years ago. In that time, they and their all-volunteer group have taught more than 100 prisoners to knit, while dozens more remain on the waiting list.

“For a man to have picked up knitting needles … to respond to being taught to knit, they’ve already shown themselves to be open people, people who want more,” Zwerling said.

One inmate said he enjoyed knitting because it gave him something else to focus beyond the barbed wire fences and watchman towers.

Zwerling and Rovelstad call it “finding the Zen.” Another inmate compared it to hanging out at a coffee house, saying it gave him relief from penitentiary life.

“It’s like I’m at Starbucks, without the coffee, just chillin’, enjoying the day,” he said. “I’m doing something constructive. I could be doing a lot worse, to be honest with you. I could be running amok, being a pain in the behind. But I choose to come in here in relax.”

Since “Knitting Behind Bars” was introduced, Jessup’s facility administrator Michele Jones said she has seen a difference in the men’s behavior.

But the ladies still remember the Department of Corrections initial response to their program.

Now some of the inmates have even skipped dinner to make it to knitting class. Zwerling and Rovelstad give each prisoner in the class a five-minute lesson – they swear they can teach anyone.

The prisoners’ first project was knitting “Comfort Dolls,” which were then given to children removed from their homes because of domestic issues. Now the men are working on hats for students at inner city schools.

“You know, we did a lot of wrong in society and I guess this is a way of giving back,” an inmate said.

While critics of the program might say these prisoners should be doing hard time, Zwerling and Rovelstad say they have seen the inmates change for the better and they think it’s important to give them something beneficial for the long term.

“These guys are getting out,” Rovelstad said. “They can’t go one day from doing hard time to the next day being on the street. They have to make a transition somehow. It’s what we can offer them.”

How can I get in touch with the ladies in charge of this group? Thank you.